I Bought My Third Private Jet During COVID-19 Pandemic, Prayed For Disease To Stay— Apostle Suleman 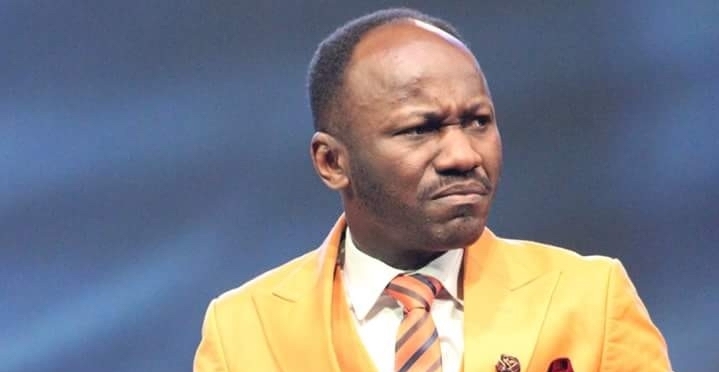 The General Overseer of Omega Fire Ministries International, Apostle Johnson Suleman, has boasted about purchasing his third private jet during the COVID-19 pandemic.

According to a trending video seen by SaharaReporters on Wednesday, Suleman was heard saying he already had two jets but purchased a third one while people were busy complaining about the pandemic.

The cleric further stated that he was praying for the pandemic not to end because he was prospering and resting.

He said, “In COVID, I bought a jet. The third one. I have three. I was praying for COVID not to end because I was resting. While people were complaining, my wife asked, ‘Can life be this sweet?’. Am I talking to somebody here?.

“Somebody asked if it’s true and I said it is true. They said, ‘It’s risky o’. I said I didn’t know it’s risky because I already bought the machine. When you speak in tongues, you’re printing money.”

In recent weeks, Suleman has also been in the news after Mike Davids, a former cleric at his church, alleged that he slept with Faith Edeko, his wife.

In some videos posted on Instagram, the aggrieved pastor accused Suleman of sleeping with his wife and destroying his marriage.

He said trouble started when the 49-year-old cleric was planning to set up a gospel television station and had requested the assistance of his wife who was a broadcaster with NTA at the time.

He said it was during one of his wife’s visits to his place that the “clergyman slept with her”, explaining that his marriage has collapsed since then.

“Apostle Suleman has given her a branch of the church in Utako, Abuja to head without permission. I am calling on Pastor David Oyedepo, Pastor Paul Enenche, Pastor Enoch Adeboye, Pastor Margaret Idahosa, CAN, PFN,” he said in one of the videos.

“Apostle Suleman has damaged my life. I have not seen my wife and children for two years and Apostle Suleman says if I ever go near them, he will have me taken out. I have a video where he said he will make me disappear. I don’t want to lose my life.”

Suleman has denied all the allegations, describing Davids as a bitter man.

What are the risks if everyone is not vaccinated against COVID-19?

No Result
View All Result